MODEC awarded the Marine Money Offshore Deal of the Year 2019

MODEC, Inc. ("MODEC") is pleased to announce that a US$ 1.1 billion project bond, issued by an affiliate of MODEC in August 2019, has been awarded "Marine Money Offshore Deal of the Year 2019" in the Innovation category.

This issuance by MV24 Capital B.V., an affiliate of MODEC, was for the refinancing of a Floating Production Storage and Offloading (FPSO) vessel, the FPSO Cidade de Mangaratiba MV24, chartered to TUPI consortium led by Petróleo Brasileiro S.A. to operate in the Lula Iracema field in the Brazilian pré-salt. The deal aimed to strategically diversifying its financing sources for MODEC's entire FPSO charter business. This transaction marked the first project bond for a FPSO project sold in the Regulation S/Rule 144A market, for the Brazilian oil and gas industry, as well as the largest infrastructure issuance in over 5 years. This project bond was sold to a broad range of international investors, mainly in Europe and the United States. Total investor demand for the issue was approximately 2-times the issue amount of the US$ 1.1 billion project bond. The strong reception for the bond in the international market highlights MODEC's highly praised asset management capabilities as well as operations and maintenance for FPSOs.

The annual Marine Money Offshore Deal of the Year awards are designed to reward issuers and underwriters for the most outstanding debt and equity issues in the offshore financing markets that year. In April 2020, Marine Money announced the winners of the Year 2019.

"When reviewing the many nominations we receive, we are always on the lookout for transactions that identify new sources of capital and that can be replicated so that they will impact the wider industry. This transaction exemplifies both of these critical elements," commented Marine Money Managing Director, Mr. Mike McCleery. "For MODEC and the broader market, unlocking new sources of funding is essential to continue developing these projects and efficiently accessing the world's energy resources in the decades to come."

"We are extremely honored and proud that Marine Money awarded us the Offshore Innovation Deal of the Year 2019," commented Yuji Kozai, President and CEO of MODEC. "We understand that this recognition for the first project bond of our business honors our leading position in the FPSO industry as well as financial stability with diversity that is one of the sources of our competitiveness." 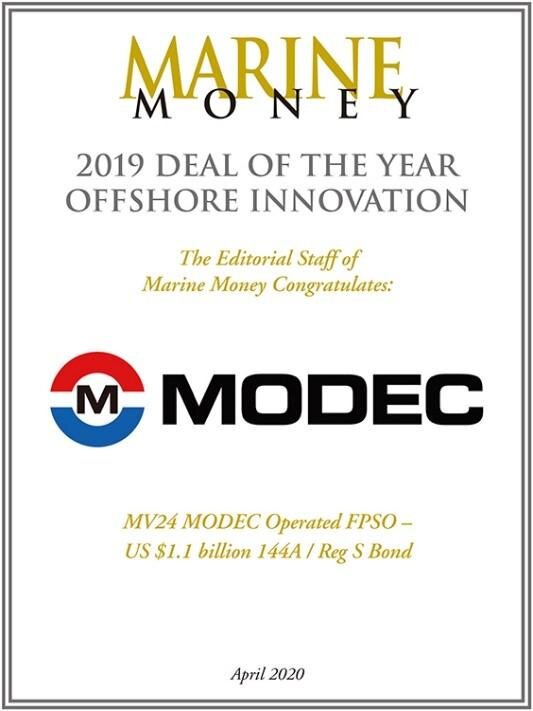